25 of the wildest, most heart-pumping theme park rides in the US 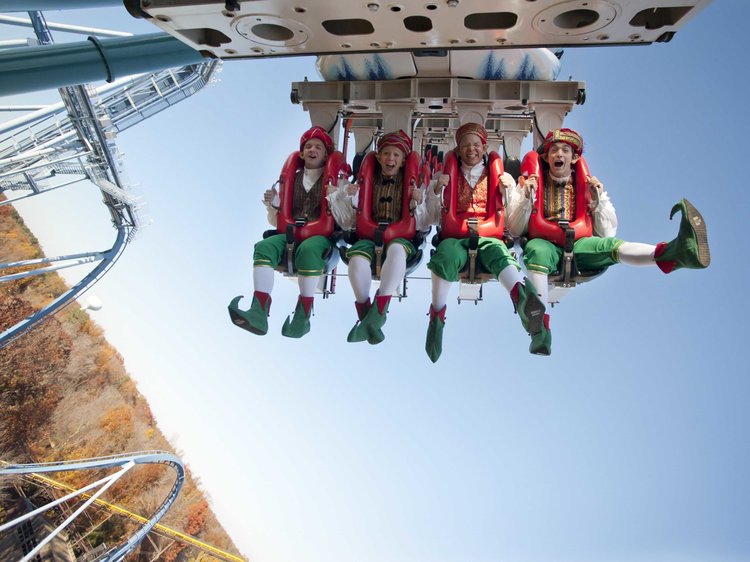 Whether you’re an adrenaline junkie or a casual coaster fan, there are exciting rides to experience at theme parks across America.

From brand-new roller coasters like the Wonder Woman Golden Lasso Coaster at Six Flags Fiesta Texas in San Antonio, to thrilling favorites such as Fury 325 at Carowinds in Charlotte, North Carolina, here are 25 of the most exciting theme park rides in the US.

Twisted Cyclone at Six Flags Over Georgia in Austell, Georgia 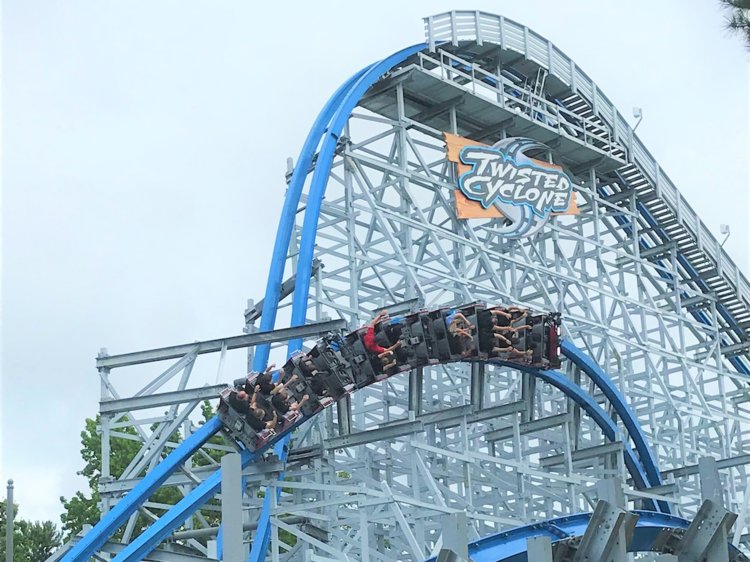 Twisted Cyclone, a combination wood/steel roller coaster, is the newest addition to the coaster lineup at Six Flags Over Georgia.

Reaching a speed of 50 miles per hour, this ride gets your adrenaline pumping from the get-go with a 75-foot initial drop from about 10 stories high. 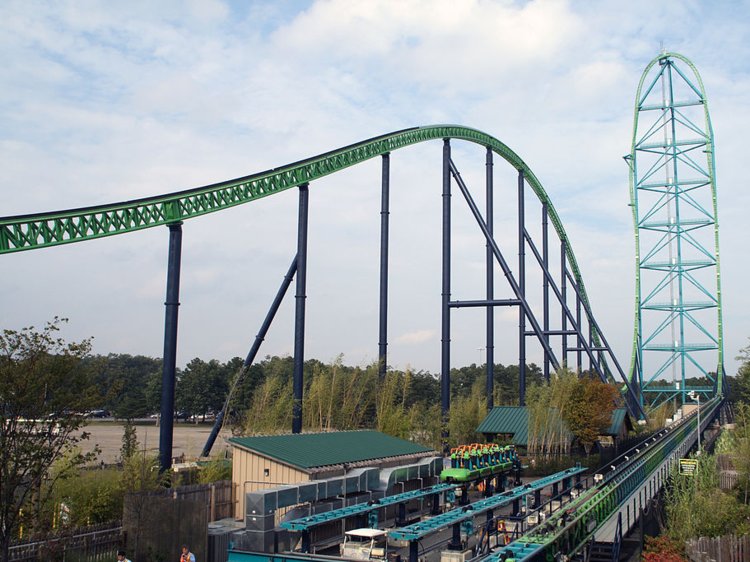 Towering more than 450 feet in the air at its highest point, Kingda Ka earns the distinction of being the tallest roller coaster on the planet.

And as the world’s second-fastest coaster, it zips from 0 to 128 miles per hour in 3.5 seconds. It’s surpassed in speed only by Formula Rossa at Ferrari World in Abu Dhabi, United Arab Emirates, which tops out at 149.1 miles per hour. 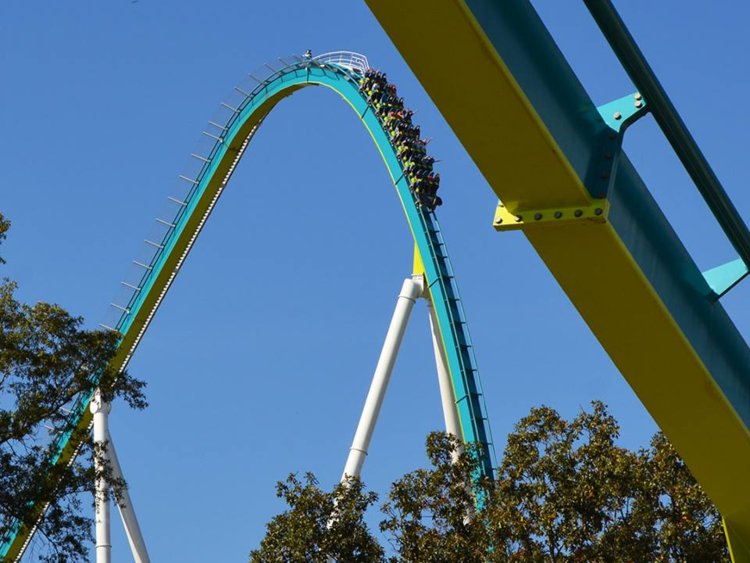 Fury 325 is one of the world’s tallest giga coasters — a class of roller coasters that range from 300 to 399 feet tall and complete a circuit, according to Coaster Critic. The “325” in the ride’s name refers to its peak height.

This imposing coaster, which crosses the North and South Carolina state lines, can reach speeds of up to 95 miles per hour.

It was named the best steel roller coaster in America in 2017 by the Golden Ticket Awards. 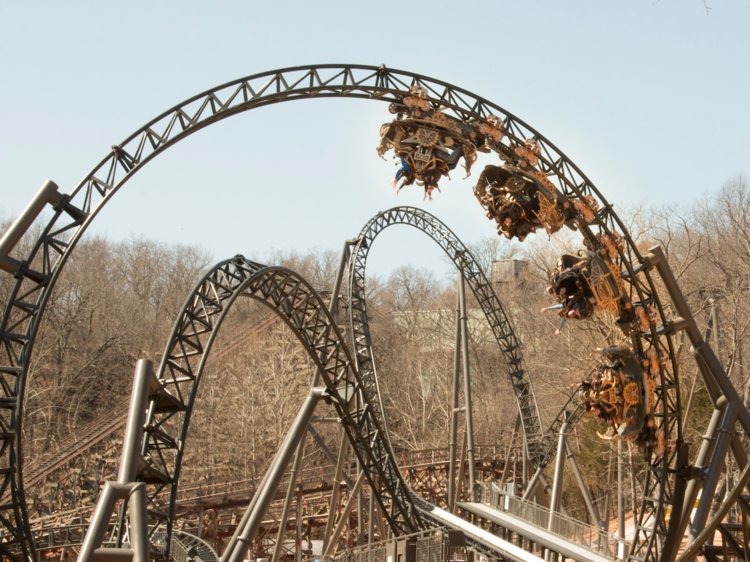 Silver Dollar City’s newest roller coaster, Time Traveler, has a nifty steam punk vibe. Even more impressive than its aesthetic are the records it sets as the world’s tallest, fastest, and steepest complete-circuit spinning coaster. Each of the coaster’s cars is equipped with a magnetic control mechanism that allows riders to adjust the intensity of the spinning.

Custom-designed for the theme park’s Ozark environs, Time Traveler stands 100 feet tall and goes up to 50.3 miles per hour. 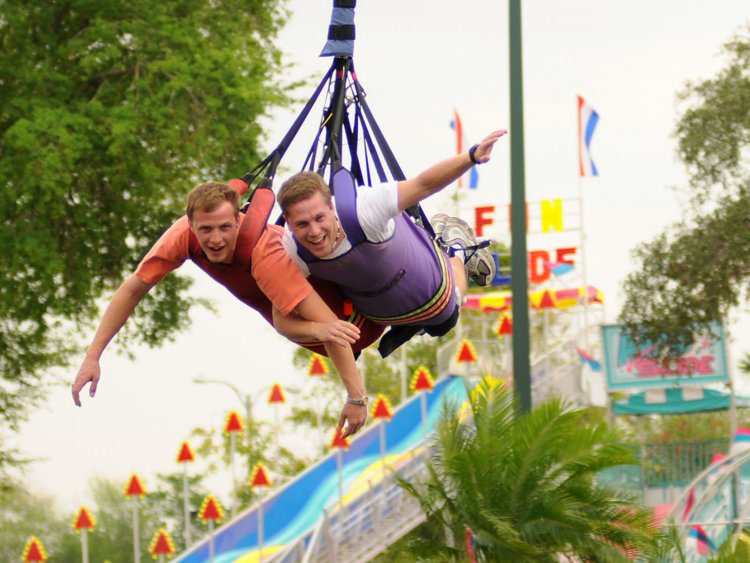 Launching riders 300 feet in the air, SkyCoaster — the tallest ride of its kind — lets thrill-seekers experience the sensation of sky-diving from the comfort of a Florida amusement park. 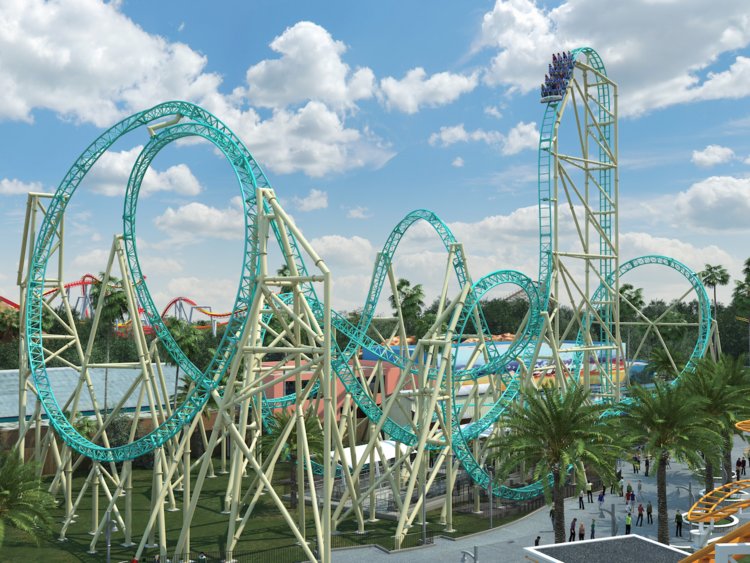 At night, the ride — which features five different types of inversions — comes to life with bright track chase lighting. 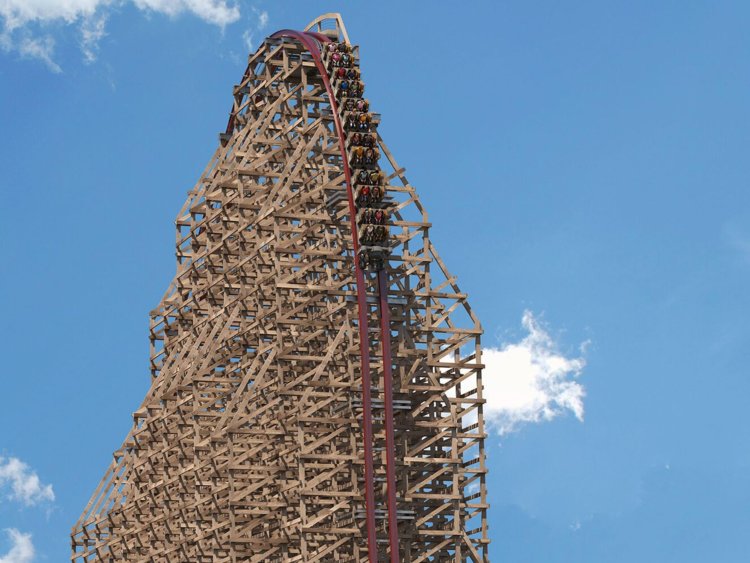 New at Cedar Point, Steel Vengeance is a Wild West-themed roller coaster that soars to a height of 205 feet. This wood and steel hybrid coaster, which can go as fast as 74 miles per hour, thrills riders with an initial 90-degree drop and about 30 seconds of airtime. 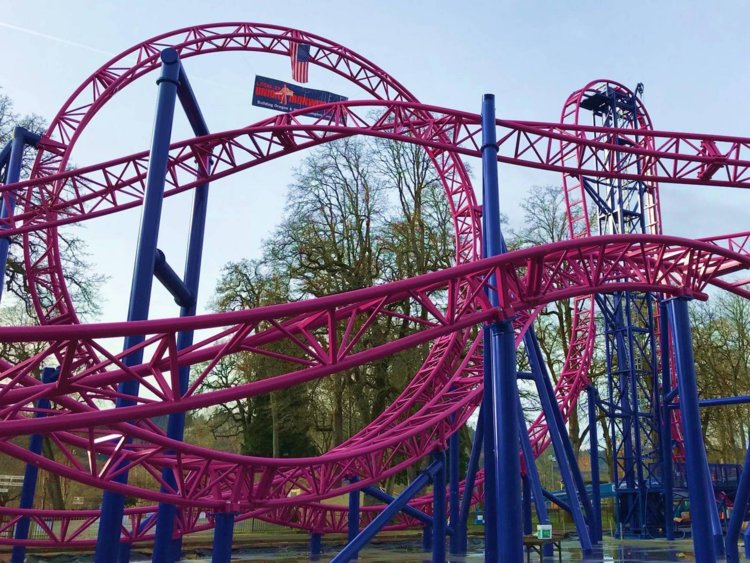 With a speed of 45 miles per hour, Adrenaline Peak isn’t the fastest coaster out there — but between its 72-foot vertical lift and 97-degree loop , this new ride still offers plenty of excitement.

The coaster’s name — which was selected in a contest organized by Oaks Park — pays homage to Portland’s famous mountains. 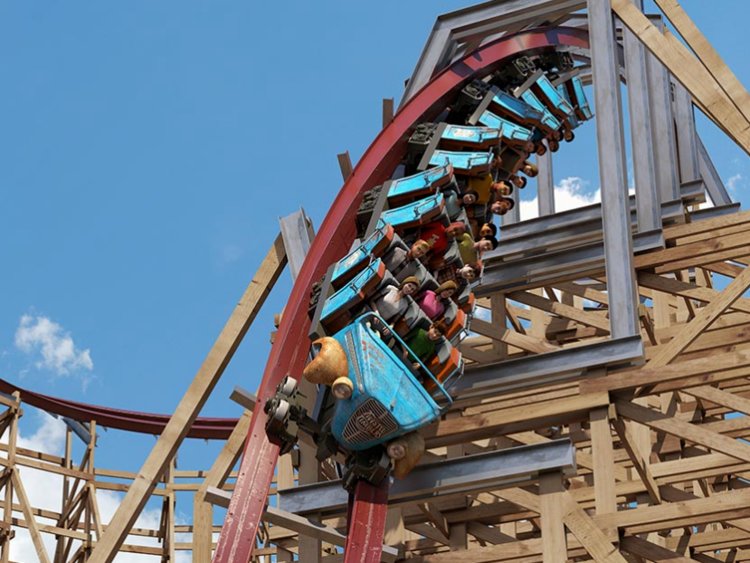 Like Steel Vengeance, Twisted Timbers, a new coaster at Kings Dominion, is a steel/wood hybrid. True to its name, it features breathtaking twists — including a 109-foot-tall barrel roll drop — as it speeds along at 54 miles per hour. 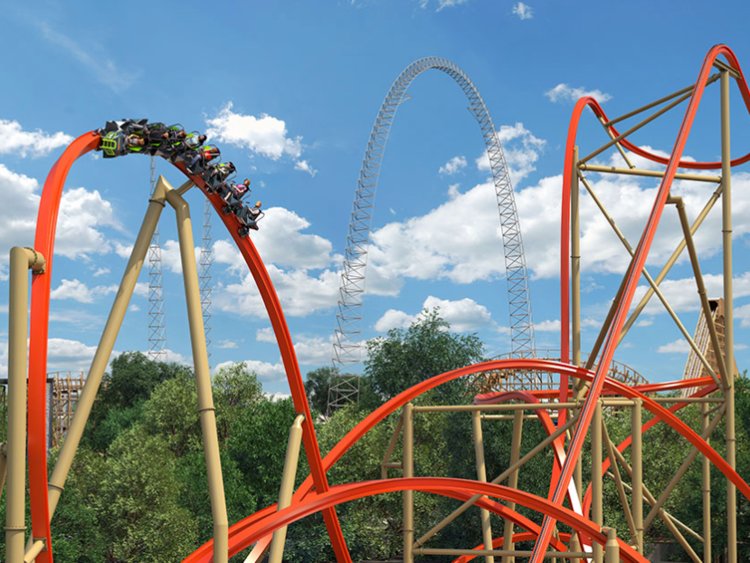 With RailBlazer, California’s Great America introduces an innovative new roller coaster to its roster. Its single-rail design allows for a low center of gravity, which in turn makes for a more dynamic ride experience.

At 52 miles per hour, this ATV-inspired coaster brings riders to a height of 106 feet only to drop them at a 90-degree angle. 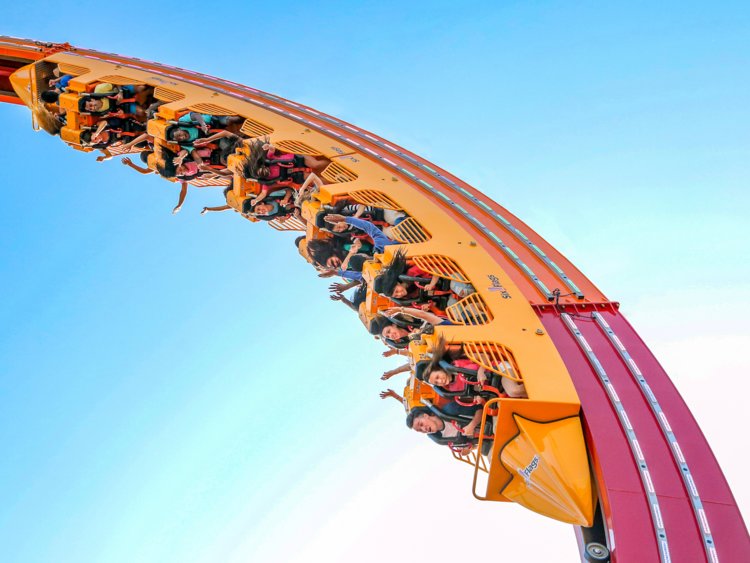 Able to make 360-degree revolutions, the 100-foot-tall Mardi Gras Hangover is being billed as the world’s largest loop coaster. 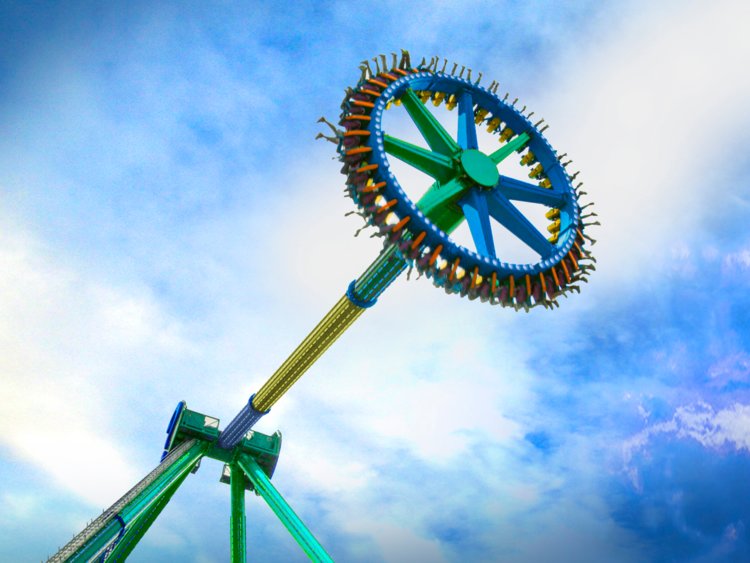 CraZanity, new at Six Flags Magic Mountain, is being labeled the tallest and fastest pendulum ride on the planet. It takes riders to an incredible height of 170 feet at a peak speed of 75 miles per hour. 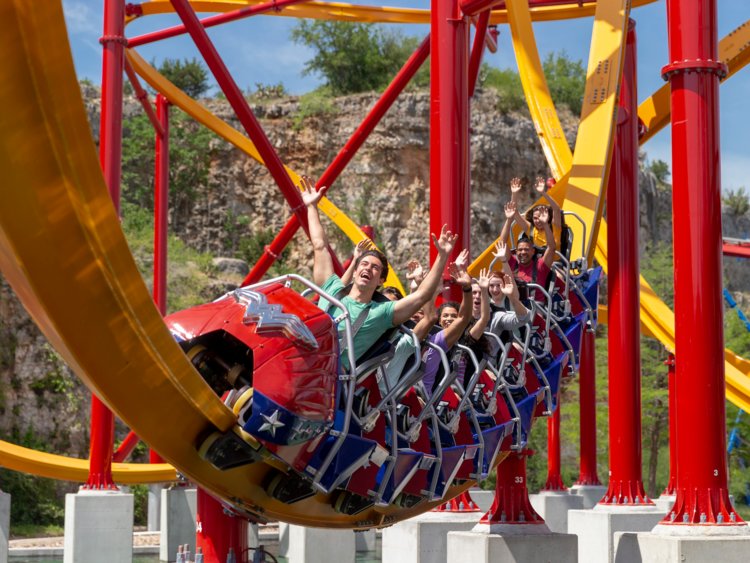 Featuring a 90-degree drop, this Wonder Woman-themed ride — a groundbreaking single-rail coaster — is just as exciting as the blockbuster film. 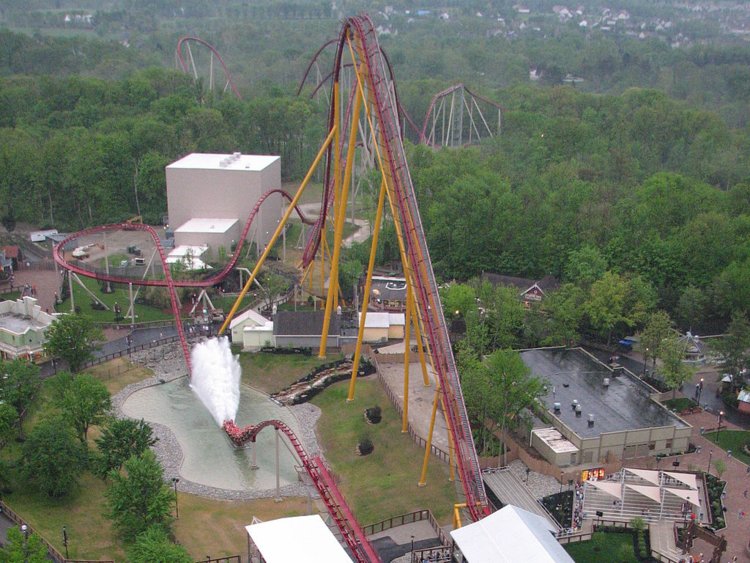 Diamondback speeds riders along 5,282 feet of track at 80 miles per hour. 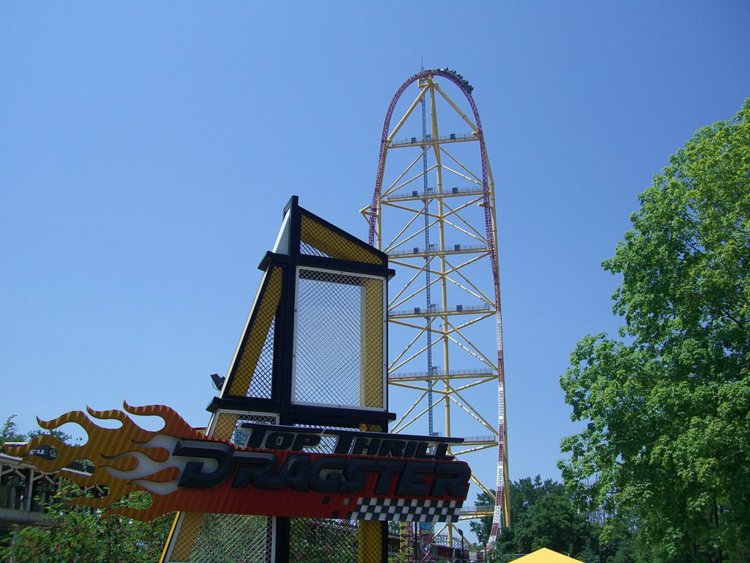 Top Thrill Dragster goes from 0 to 120 miles per hour in just 3.8 seconds , making it the world’s third-fastest roller coaster . At 420 feet, it’s also the second-tallest. 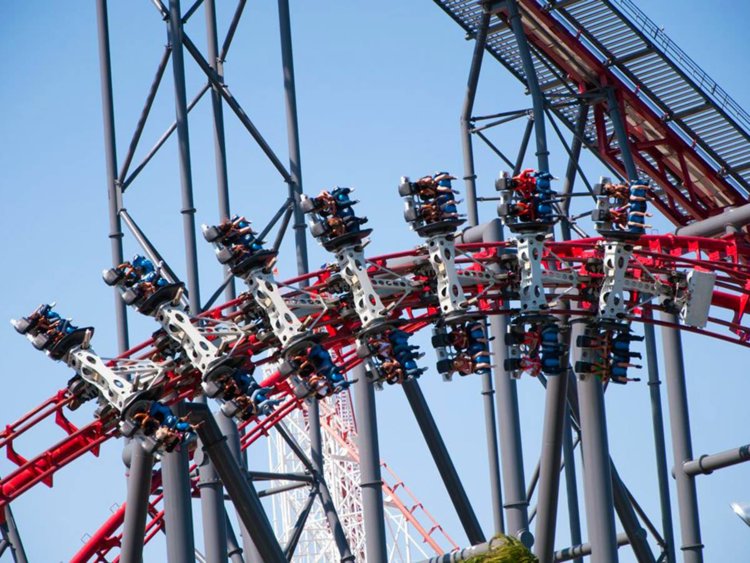 This so-called “fifth dimension” roller coaster is not for the faint of heart. Not only does X2 lift riders to a height of 200 feet — it does so with seats that rotate 360 degrees at 76 miles per hour . Video, audio, and sensory effects amp up the thrill factor even more. 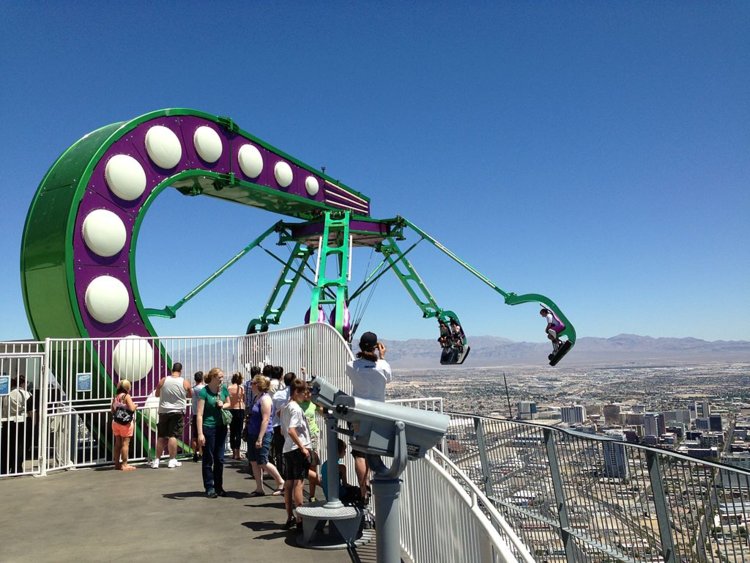 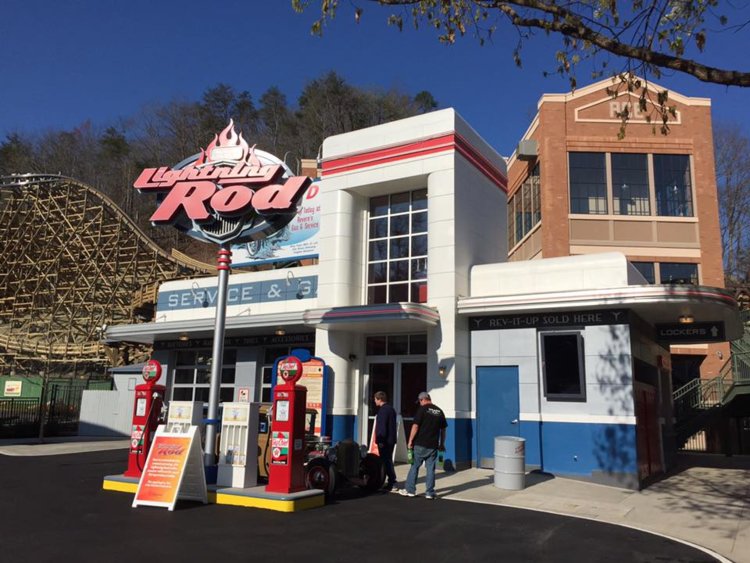 With a peak speed of 73 miles per hour, Lightning Rod — a 1950s Hot Rod-inspired ride at Dolly Parton’s amusement park in the Smoky Mountains — is the world’s fastest wooden coaster. 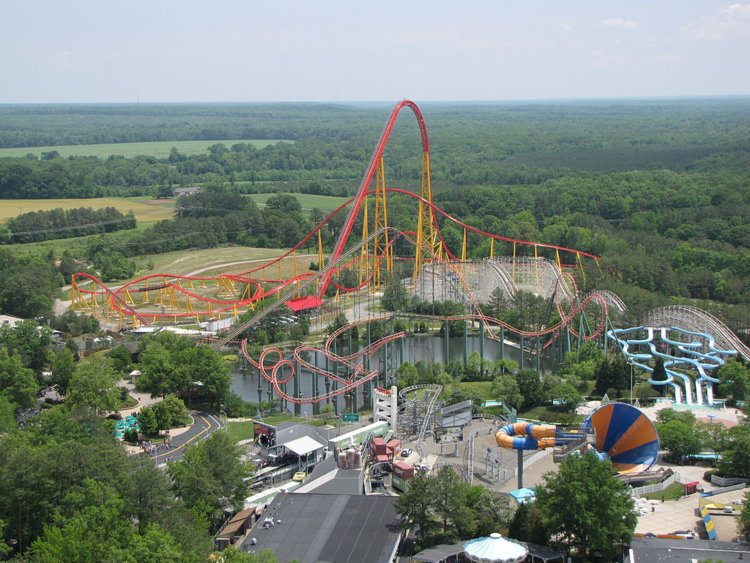 This coaster, which has an initial drop of 300 feet at an 85-degree angle, is named for its peak height of 305 feet. 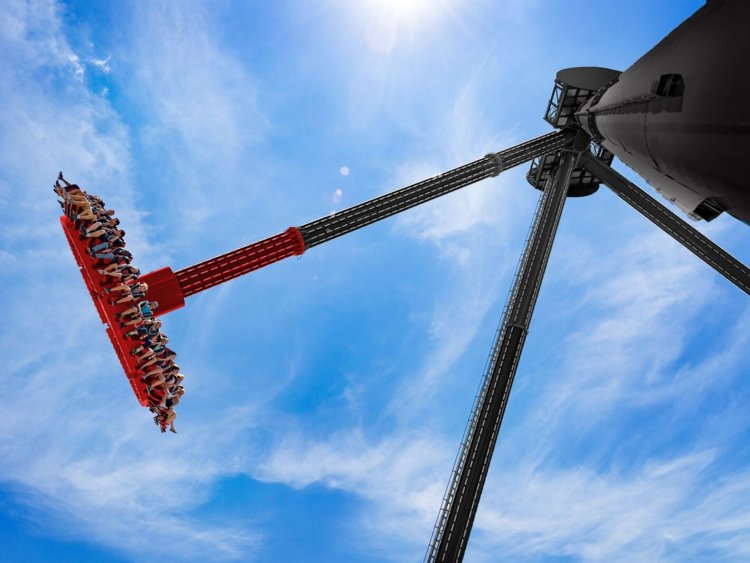 Its steel pendulum, which rotates riders counter-clockwise, reaches speeds of 70 miles per hour.

Cannibal at Lagoon in Farmington, Utah 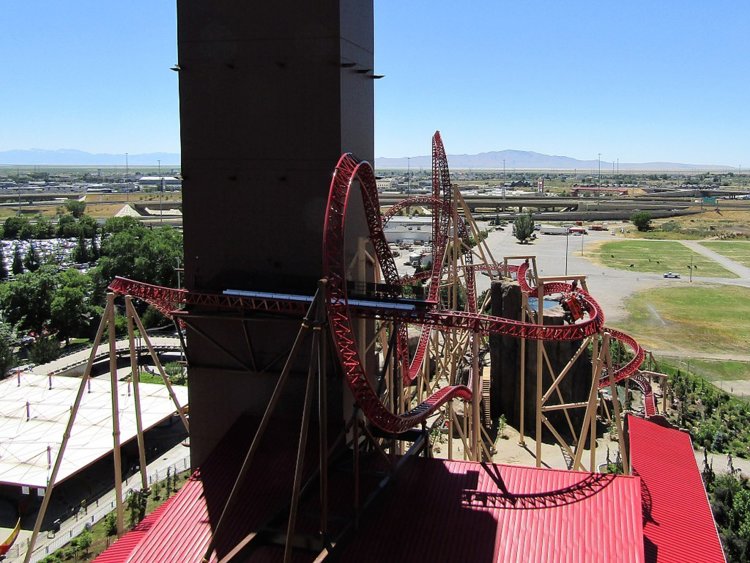 This fierce, 70-mile-an-hour coaster elevates riders 208 feet in the air only to plummet them in a freefall at a 116-degree angle. 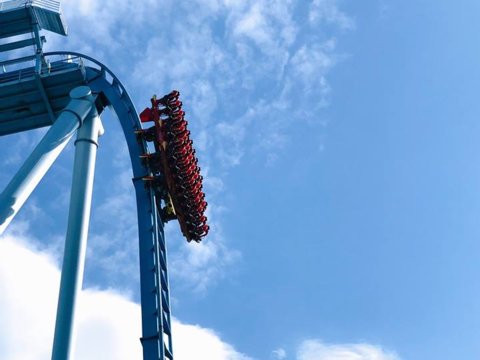 Named for a legendary beast, this floorless dive coaster packs a punch with a 205-foot drop at 75 miles per hour. 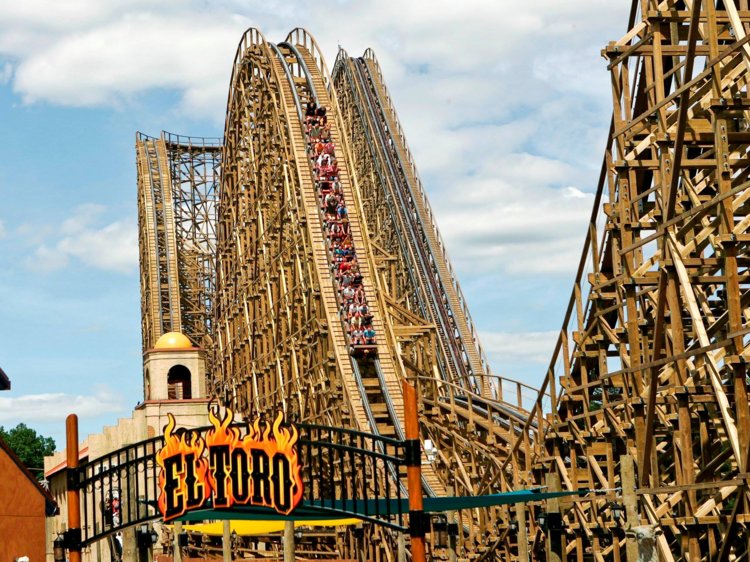 Don’t let the fact that it’s a wooden roller coaster deceive you: El Toro, which begins with a 176-foot, 76-degree drop , is one of the most thrilling coasters in America.

Titan at Six Flags Over Texas in Arlington, Texas 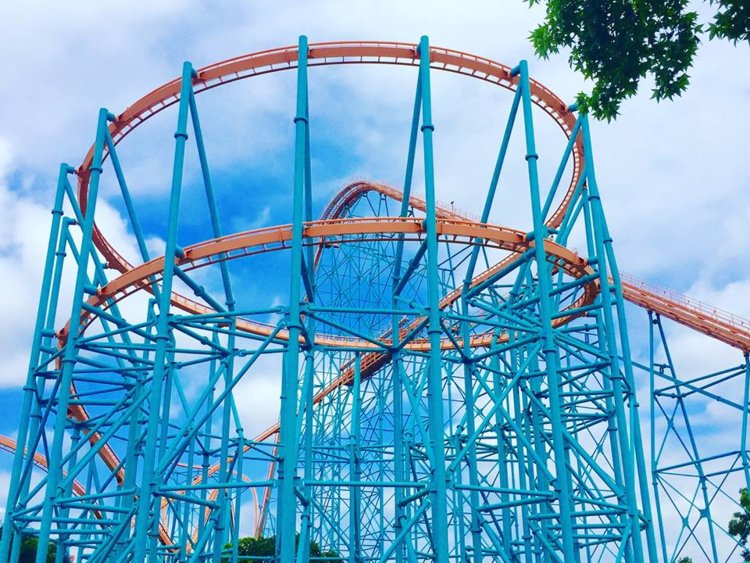 This giant of a ride is so intense that it’s defined as a hypercoaster: meaning it stands 200 feet high or taller and can launch riders from 0 to 70 miles per hour in four seconds.

Not only does Titan reach a height of 255 feet (and a top speed of 85 miles per hour) — it also features two back-to-back, 540-degree spirals. 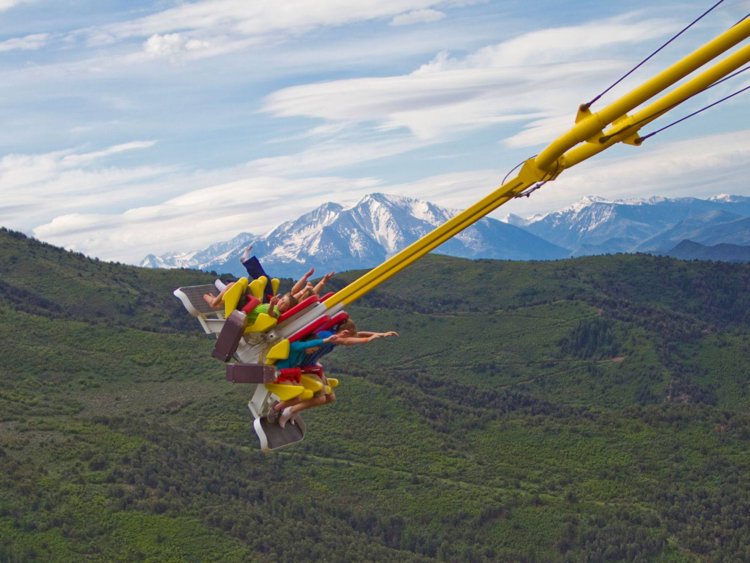 If you brave the Giant Canyon Swing, which sends riders 1,300 feet above the Colorado River at upwards of 50 miles per hour , you’ll be met with incredible scenic views.